We have created Free Primary Maths & English resources for you to use at home during this difficult time.

Speech marks can, and do, get quite complicated and the rules are often bent. Look at any collection of books or newspapers and you will see some use the double quotation marks and some use single. For example, The Times, The Sun and The Guardian use double and The Mail and The Observer use single. Much of it has to do with who is in charge of typography at the newspaper concerned and the look of the page, rather than for grammatical reasons. Others argue that double quotation marks should be kept just for direct speech and single quotes for any other purpose. We have decided to start off with the double marks for direct speech as these are used in the Year 6 Grammar, punctuation and spelling test.

We have a great set of pages on speech marks, making it as easy as possible for children from Year 3 on to begin to use the correct format for direct speech. We have kept it simple by having the speech either at the start of the sentence or the end. (e.g. The boy shouted, “Help!” or “Help!” shouted the boy.)

Apostrophes are probably the most misused of all punctuation marks. Knowing how they came about may help to understand possessive apostrophes and it all goes back to medieval times. Over 500 years ago possession was shown using a phrase like: ‘ the boy, his conker’. Over a long period of time this became shortened in speech to ‘the boyis conker’ and then simply ‘the boys conker’. However, in writing, this needed to be clarified so an apostrophe was used to denote the missing letters. (Just like apostrophes are used today to show missing letters.)

Simple really, except for one thing; none of the examples shown end in the letter s. This is where it all gets rather confusing! The problem is that some words that end in s are plural and some are not.

If the word is plural and ends in s we just put an apostrophe after the last s.

This shows us that there is more than one car.

This shows us that there is only one princess.

Brilliant, but some plurals do not end in s, such as the word children. In these cases we revert to the ’s e.g. the children’s toys.

The semicolon has probably generated more debate than any other punctuation mark; indeed, some writers go out of their way to avoid using them. However, it is a clever little punctuation mark, with a number of uses. The main function is to create a pause in a sentence, somewhere between a comma and a full stop.

A semicolon is often used to replace conjunctions such as ‘and’ or ‘but’ to create greater emphasis. There are no precise rules for using semicolons; some teachers will be impressed by them whilst others will be more critical.

The colon has a very different purpose than the semicolon. It is usually used to introduce a list but can also be used to present an explanation or a conclusion. Here is one example:

There was only one way to win: he had to run faster.

Finally we come to brackets. Brackets are used in both Maths and English and the rules are very strict when using them in maths (remember BODMAS). However, in writing, their use is much less clearly defined. Their main purpose is to provide further information to a sentence, although it is important to ensure that the sentence would still be complete without the text in brackets. Here is one example:

Our school (St Luke’s Primary) is one of the best in the county. 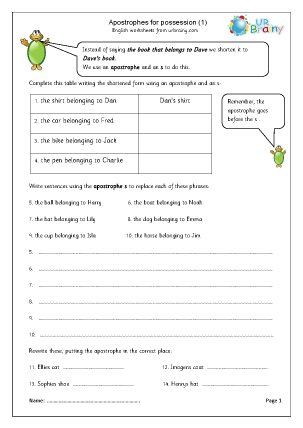 An introduction to using the apostrophe to show possession. 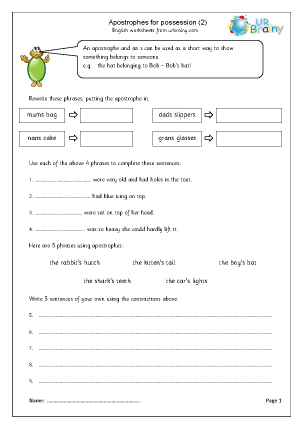 More work on the apostrophe to show possession. 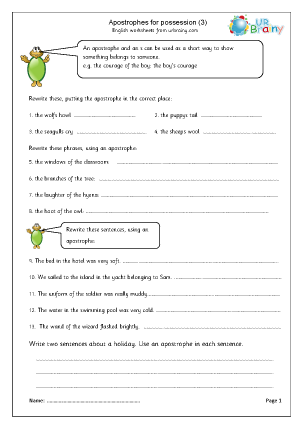 Further work on the apostrophe to show possession. 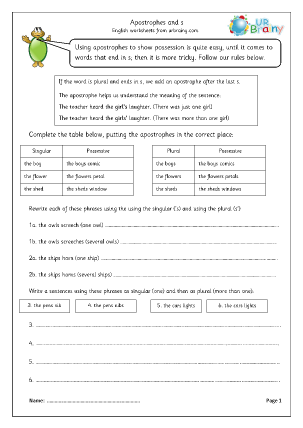 Using apostrophes to show possession is quite easy, until it comes to words that end in s. 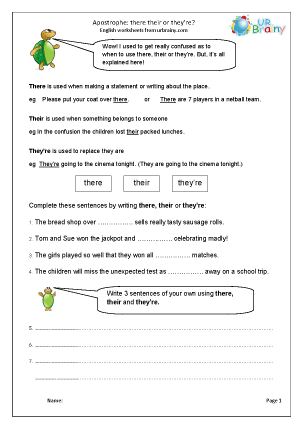 Often confusing for children, here are some simple pages explaining when to use they're, their or there. 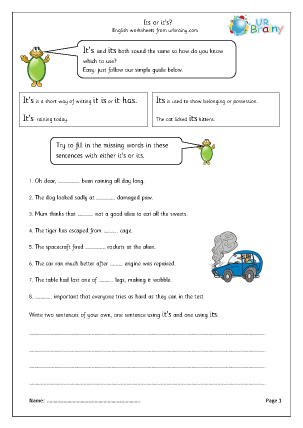 Its and it's both sound the same but which is correct? 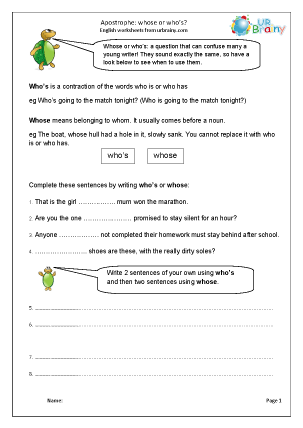 They sound exactly the same but it is important that children use who's and whose correctly. 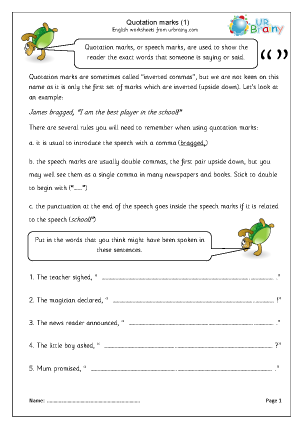 An introduction to quotation marks. 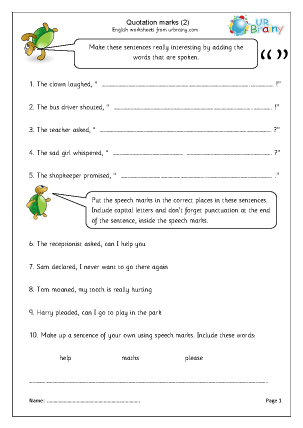 Putting speech marks in the correct place and including capital letters and other punctuation. 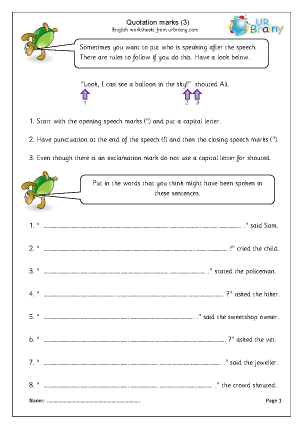 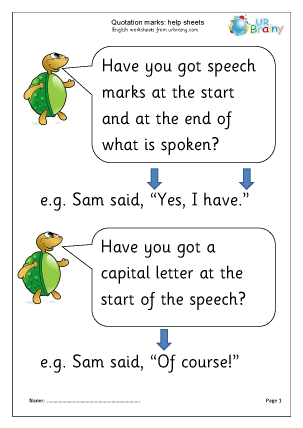 A guide for children. 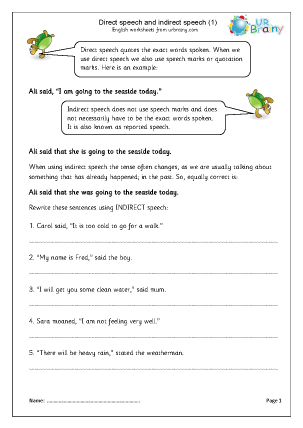 A first look at direct and indirect speech. 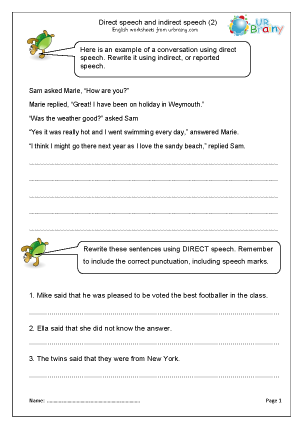 A further look at direct and indirect speech.

A first look at using brackets to add further information to a sentence. 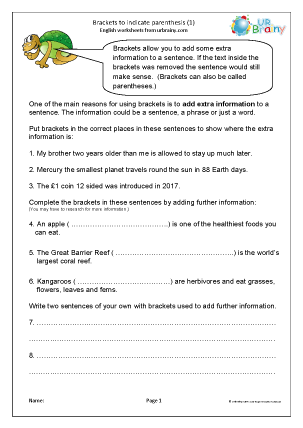 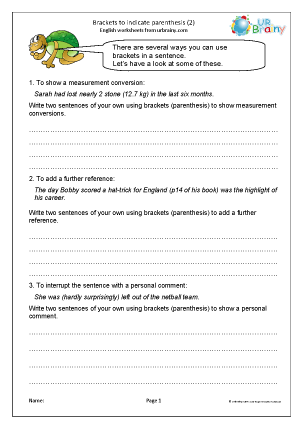 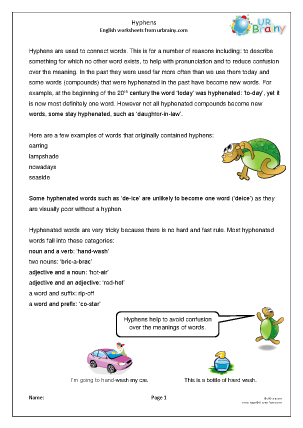 An introduction to hyphens. 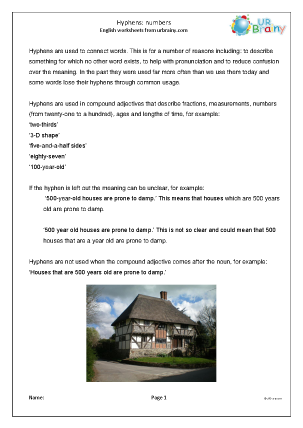 Hyphens with numbers to avoid ambiguity. 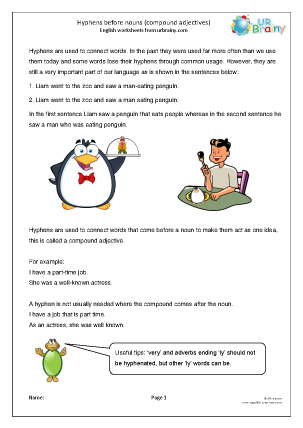 Hyphens are used to connect words that come before a noun, often called compound adjectives. 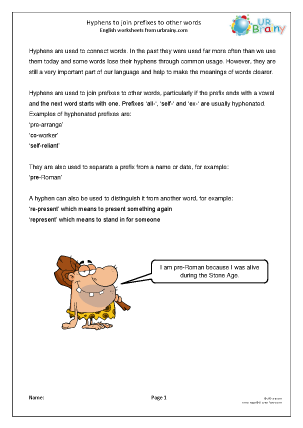 Hyphens can be used to separate a prefix from a name or date e.g. pre-Roman. 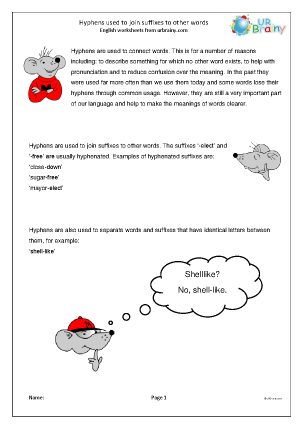 Hyphens can be used to join suffixes to other words. 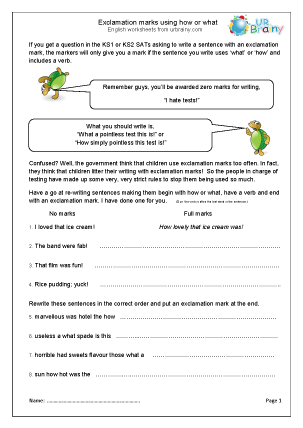 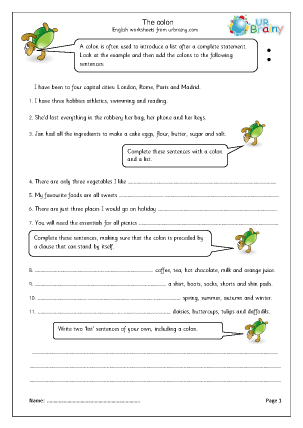 A first look at using the colon, mainly with lists. 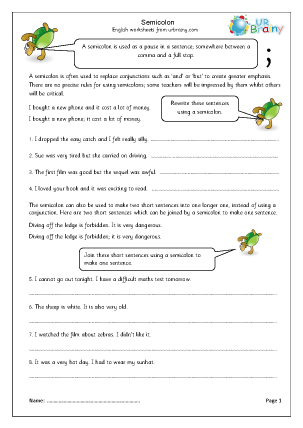 Using the semicolon in sentences. 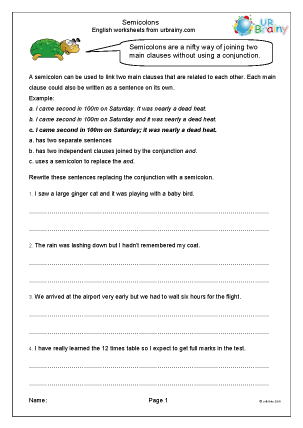