We have created Free Primary Maths & English resources for you to use at home during this difficult time.

Grammar: adjectives
Adjectives form a major part of grammar work in years 1 and 2 and children will be taught that an adjective is a word that describes somebody or something (e.g. old, careful, huge). Children will also be shown that adjectives usually come before a noun, but they can be put after linking verbs such as be, get and look in a sentence such as: Those cakes look fantastic.
Because adjectives are now included so early in the curriculum we have published two sets of worksheets on writing adjectives to describe pictures, both of which can be used in Year 1.
In Year 2 children will be expected to form adjectives using suffixes such as ful and less. Watch out, in particular, that children do not use full when changing a noun such as care to an adjective, careful.
Much of the work we have on adjectives would fit almost as easily into our vocabulary section as we look at the use of adjectives in a range of writing, including:
•    adjectives to describe the mood of people
•    adjectives to describe personality
•    small and large adjectives
•    adjectives at the seaside
•    adjectives instead of nice
•    adjectives describing animals
For older children we have sets of worksheets on comparative and superlative adjectives, adjective phrases and adjectival clauses.
A particularly interesting set looks at the order of adjectives and how we usually put opinion before the fact. For example, it sounds quite odd to say:
A red lovely coat
But perfectly normal to say:
A lovely red coat.
There are other rules about the order of adjectives including size, age and colour. It is usual to put size before age and age before colour; hence size before colour. An example of this would be ‘a large brown bag’. (It does not sound correct to say ‘a brown large bag’.) 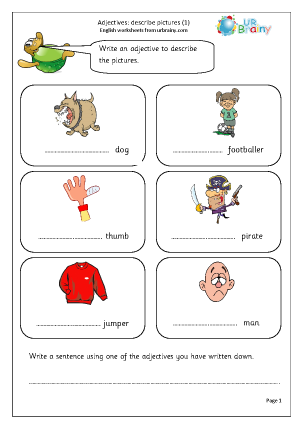 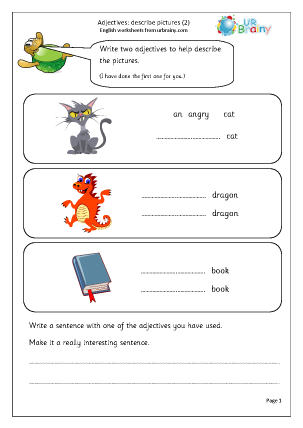 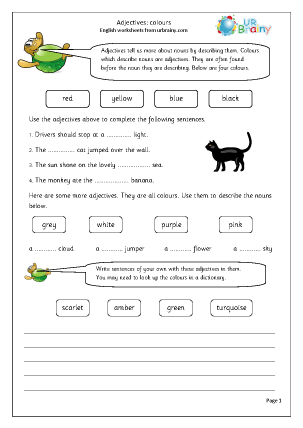 A first look at recognising and using adjectives. 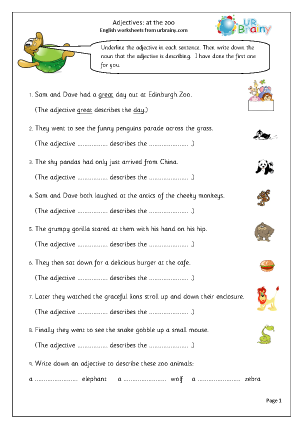 Recognising adjectives in sentences and linking them to the nouns they describe. 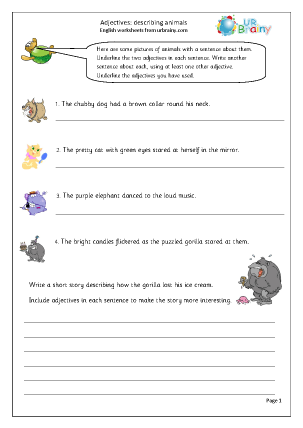 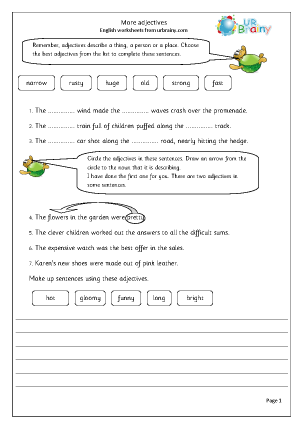 More work on adjectives and the nouns they describe. 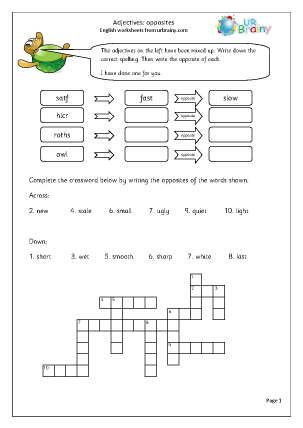 This page includes a tricky crossword, with the clues all being the opposite of the answers. 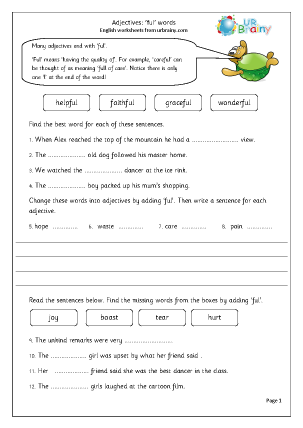 A quick look at some of the adjectives that end in 'ful'. 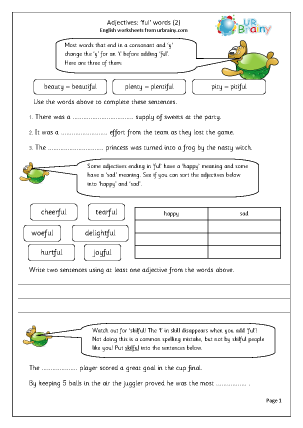 Further work with adjectives that end in 'ful'.

More on adjectives as describing words to help with descriptive writing (Year 3 on). 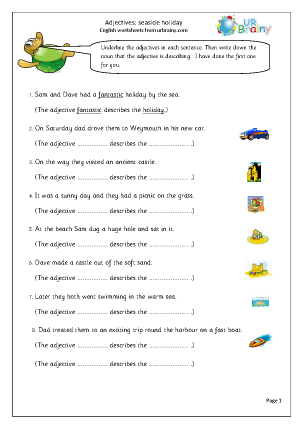 Recognise the adjectives in the sentences and link them to the nouns they describe. 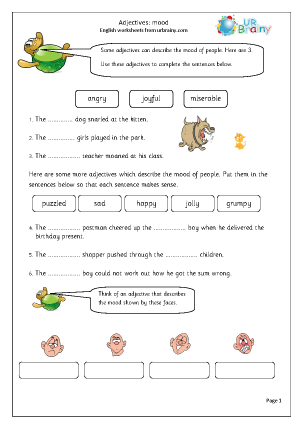 All the adjectives on this page describe the moods of different people. 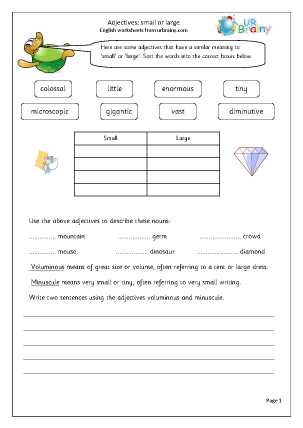 A closer look at some of the adjectives that can be used instead of small or large. 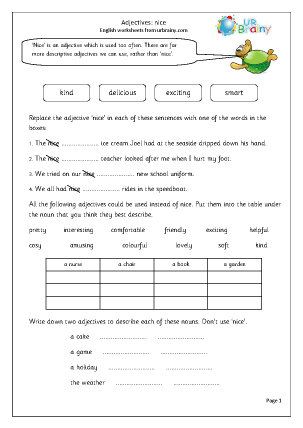 Nice is an overused word. This page explores some of the words which could replace nice. 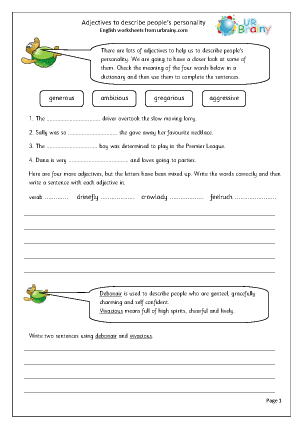 A quick look at adjectives which can be used to describe personality. 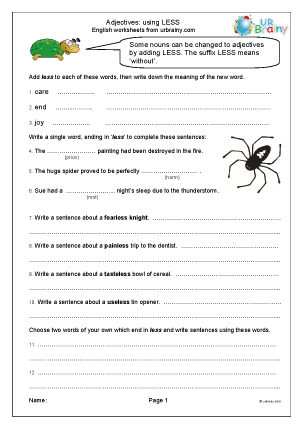 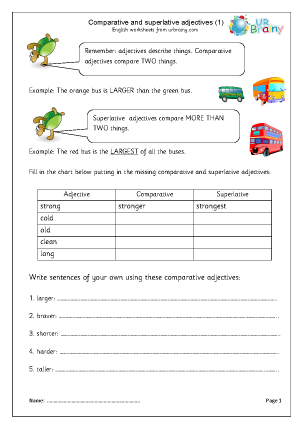 A first look at comparative and superlative adjectives. 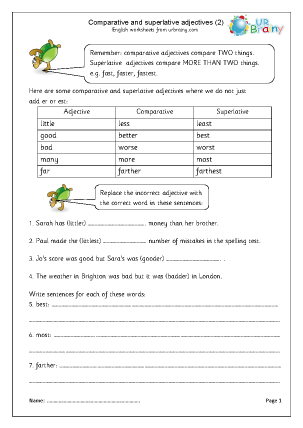 A look at some of the more unusual comparative and superlative adjectives, such as good, better, best. 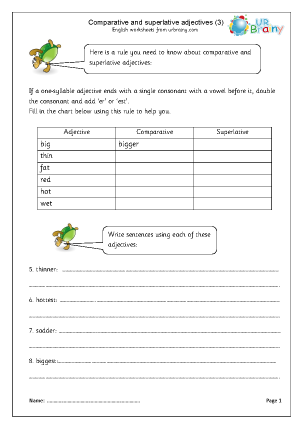 When to use more and most to make comparative and superlative adjectives.

The order of adjectives, adjective phrases and adjectival clauses (Year 4 on) 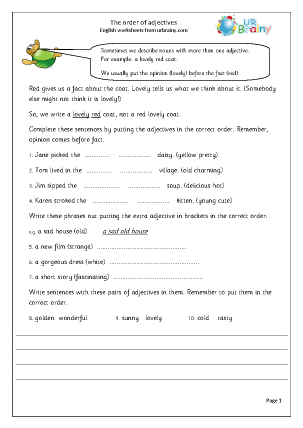 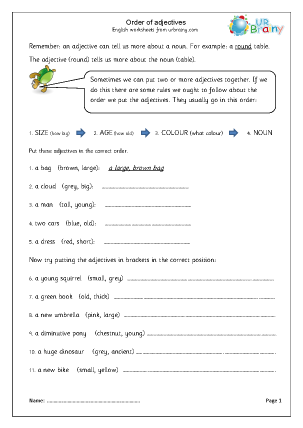 A closer look at the order of adjectives. 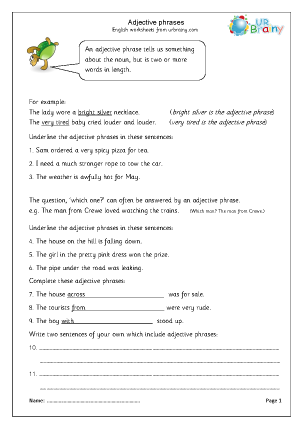 Quite tricky work on adjective phrases. 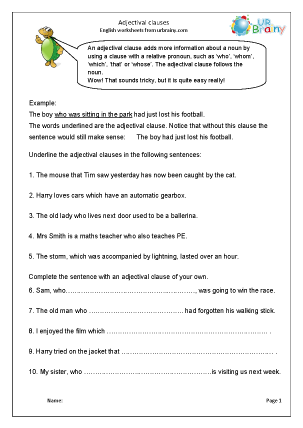 Adding more information to a sentence with the use of an adjectival clause.